Property rights enthusiasts often argue their opposition to preservation ordinances through the lens of “highest and best use.”  The concept of highest and best use provides that any given parcel of land should be used in a reasonable, legal, and financially feasible way to yield the highest value for that land.  Think of it this way: this principle is essentially why skyscrapers are a thing.  You can use the land over and over and over again, collecting rent each time.  And tell me, readers, what’s a better use than making cold, hard cash? For  economy of column space, we’ll keep zoning out of the discussion because that’s a big discussion.  Just know that you can only build skyscrapers where you are allowed to build skyscrapers. Enough on that for  now.

These same anti-preservationists would have you believe that landmark designation will seriously devalue your home, because it will put restrictions on your right to alter the property.  While it is true that some designations can restrict your ability to make significant changes to the exterior of a landmarked property or a property in a landmark district, the very popular idea that these restrictions adversely affect property values across the board is just plain irresponsible.  In fact, the opposite is almost true: though designating your historic neighborhood won’t guarantee a rise in property values, studies have shown it is very likely.  And by “studies,” I don’t mean one or two that were done when NHPA was passed fifty years ago — I mean dozens within the last fifteen years.

Historic district designation has become an important tool for neighborhoods to preserve and maintain their historic character.  Properties in distinctive, cohesive neighborhoods with a significant architectural identity nearly always make their owners a profit when it comes time to sell.  The very landmark designation that instills such fear in so many is what allows historically and architecturally significant neighborhoods to retain their character.  And in this case demand is a huge part of the value.  They literally don’t make architecture like they used to.

Preserving distinct architectural character isn’t all that landmark designation will do, though.

Here’s a plaque thats pretty, but does nothing.

National and state level designations tend to convey more prestige to a property with a big shiny sign out front, and it also makes federal and state tax breaks available to the owners of the listed properties. In reality, listing your property or district federally or at the state level offers no real protections, as listing is voluntary and owners can demolish or significantly alter their listed properties.  National Register listing is a nice honorific that may or may not allow you to take advantage of a tax credit, but it doesn’t offer any honest-to-God, on-the-ground, enforceable protection.  More of a Certificate of Achievement than a Grand Prize win, if you will.

I know what you’re thinking: as we all learned in high school health class, protection is very, very important.  Luckily, local level historic district designations offer much protection. Typically, any significant exterior alterations, demolitions, and new construction within local historic districts must be reviewed and deemed compatible by a landmarks or historic preservation commission.  Architectural review, which some consider a touch invasive, maintains the historic character and integrity of designated structures and neighborhoods.

Heres a handsome plaque that does EVERYTHING.

Now let’s talk dollars and cents.  How does designation as a historic district help your property values?

The property values have been shown to increase over time, and increase more than non-designated neighborhoods with similar housing stock, construction, and design. For example, a study of 25,975 single family homes sold in Phoenix in 2005, including 212 that were located within a historic district, showed that historic designation increased the average marketable sales price of a house by 31%. Not just in Arizona, but studies done in historic districts of New Jersey, Texas, Indiana, Georgia, Colorado, Maryland, North and South Carolina, Kentucky, and Virginia showed that this increase in property values because of the historic districts is typical across the country.

The limitations placed on alterations within a historic district in effect stabilize the real estate market. Homeowners and buyers are more certain of the area and market, therefore are less likely to see extreme fluctuations. It is especially beneficial to have the local designation which reviews any alterations made within the district. “Local landmarking and design review can actually boost property values by introducing certainty into the marketplace and improving the overall economic climate, which benefits all property owners” (Rypkema 2002). Not to mention the review of new construction within the district; because of explicit limits in the zoning code, home investments in historic districts will not be adversely affected by the construction of an inappropriate, out-of-scale building next door. This all means that because of the historic designation, the neighborhood will be more stable because there will not be extreme market fluctuations. 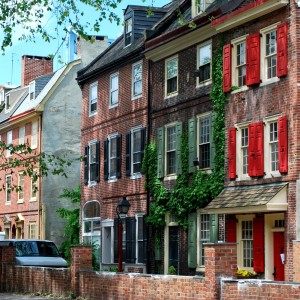 Historic neighborhoods also have more longevity because maintain higher rates of neighborhood participation and willingness to stay because the neighborhood does not change at the same pace as a typical unprotected community. Designation as a historic district raises the value of investments, promoting increased levels of home ownership and longer residence. A study done in Indiana by Donovan Rypkema in 1997 showed that “designated historic districts have higher rates of owner-occupation, and longer durations of residence by both homeowners and renters, than do similar, undesignated neighborhoods.”  If the neighborhood carries a designation, the residents take pride in that, develop and participate in neighborhood-based activities, and become more invested in the wider community — both financially and emotionally.

Closer to home, Chicago boasts a number of districts based on criteria set forth by the Secretary of the Interior  for district designation.  Base Camp for nomination is the State Historic Preservation Office (SHPO).  The Wicker Park District, Newport Avenue District, and near north suburb of Evanston are excellent examples of what we are discussing here.

The real takeaway here is that all of these studies have shown real value growth in historic properties, from a modest 5% bump to a whopping 35% increase in value.  That’s FIVE to THIRTY-FIVE percent in your pocket when your house gets listed on your local landmark register (provided, of course, you’re a responsible homeowner).  And we’re not concealing evidence here: not a single study has shown consistent, significant decreases in property values that can be directly connected to landmark designation.  It’s just plain, simple, good sense to embrace landmark designation.

If you are looking for something neighborhod specific in the Chicagoland area related to valuation,  let me know.  The more I research, the more I know.