Vernacular architecture.  Architecture of the people, by the people.  “Vernacular” is more than just a local spoken dialect.  Let’s get this party started.

The New York Times Magazine made this so we didn’t have to!

Academics and architectural historians tell us “vernacular architecture is shaped by artistic and cultural ideals modified by and adapted to the natural, manufactured, and economic resources of people living and working within a definable, local area” – that’s a mouthful. Let’s break it down; vernacular architecture is a category of buildings based on local needs, available construction materials, and traditional building methods.  Some sticklers say that the essential standard is the architect involved: basically, if there was a professional architect on the job, it’s not a vernacular house.   As a result, it’s been pretty overlooked when it comes to architectural history.  The preservation movement did a lot to bring vernacular buildings some public attention in the 1970s and 1980s, but for a long time, only monumental structures were considered worth studying.  I mean, I can see how marble and gold leaf might get you a little more excited than clapboard and local stone.  These days, though, the more birthdays America celebrates, the more we embrace the importance of our early settlements and housing forms.  There’s even a volunteer association for scholars and practitioners in the field of vernacular architecture: Vernacular Architecture Forum. Didn’t expect that, did you?

AND THE PLOT THICKENS: Vernacular Architecture Forum’s 2015 conference will be held in Chicago.  There’s not much information on it just yet, but gird your loins, vernacular fans.  The vernacular spectacular is comin’ to town.

In all seriousness, though, what’s really great about vernacular architecture is that it is by nature deeply connected to particular people in a particular place at a particular point in history who had access to a particular kind of technology.  Sure, you can technically say that about any building, ever built, I suppose.   The point is, there are a lot of  historic vernacular buildings that just flat-out could not and would not have been built anywhere else, and that’s really cool.

Chicago and the surrounding area, of course, have a fair number of cool vernacular types, too.  Let’s look a little closer at what’s here in our back yard. 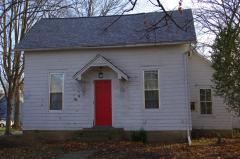 A typical downstate hall-and-parlor. This one’s in Urbana. 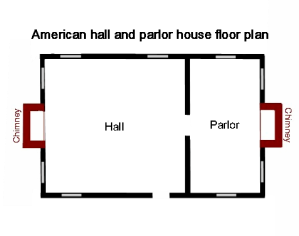 This about says it all.

The hall-and-parlor house is common throughout the Midwest, especially in rural areas that were settled relatively early.  It’s a two-room floor plan (a hall and a parlor, go figure), but of course, variations on the basic structure came and went over time.  The plan originated in medieval England, and arrived on the East Coast with 17th- and early 18th-century English settlers.  As people moved west, so did the hall and parlor house type.

Generally, the hall-and-parlor house is the aforementioned two rooms wide and one deep with a side-gabled roof.  Illinoisans tended to fancy up the basic plan by adding a small, sheltered porch that led into a vestibule with a staircase to the second floor and doors to the hall and parlor.  Your grandparents probably called the fancy room where they hosted guests their “parlor,” and that line of thinking goes back to this housing type: the parlor was where mommy and daddy entertained important people, while the hall was where you did your actual living.

On the second floor, there was usually a loft in the early days, but over the years the loft transformed into fully-fledged bedrooms. 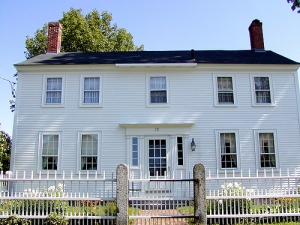 Doesn’t that symmetry just make you feel good inside?

The I-house, so called for its ubiquity in the states of Iowa, Illinois, and Indiana, is kind of a suped-up hall-and-parlor house: it was always two or three rooms wide, one deep, and two to two and a half stories high.  Gable ends were nearly always present, and usually there were chimneys on both sides of the house, allowing for fireplaces at the extreme ends of the plan on both stories.  This served to warm the house rather efficiently, as the coldest area would be the central entry hall and upstairs hall, where you’d theoretically spend the least amount of time.

The I-house also marked a stylistic development of the hall-and-parlor in that exterior aesthetics became much more important.  This was partially due to the fact that legitimate American architectural styles, such as Federalism, had migrated westward by the time the I-house plan essentially replaced the hall-and-parlor as the house type of choice.  Federalism was about order above all else, and the I-house followed suit.  Symmetry was king: except for the occasional kitchen wing, proper I-houses could be split down the middle and result in two identical halves. 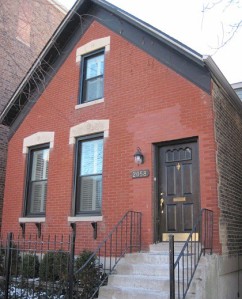 A good-looking Chicago west side cottage.

As various industries began to emerge in the Midwest, more and more laborers migrated to the area.  These newcomers often came alone, and didn’t necessarily need a hall-and-parlor house.  What the average industrial worker did need was a house that could be built quickly, cheaply, and had the potential for expansion, should a nice Midwestern lady decide to marry him.   That said, on the exterior, the early cottage was essentially a smaller hall-and-parlor turned ninety degrees, so that the gable end was on the front of the house.  It was typically one story and built of a combination of heavy timber and light framing.

Inside was a hall that spanned the entire depth of the house, with doors leading to a parlor, dining room, kitchen, and one or more bedrooms.  Later, after said Midwestern lady moved in and kids were on the horizon, it was customary to raise the cottage, build another story on the ground floor, and replace the original cottage above.  This is why you’ll see so many cottages in Old Town, for instance, with masonry on the first floor and clapboard above: the first floor also served as the foundation.

Cottages were especially ubiquitous in Chicago from the mid-nineteenth century through the early 1900s.  This was due in part to the abundance of industrial jobs and therefore industrial workers, but it can also be attributed to the city’s incredibly narrow lots at the time.  It was relatively easy to make a cottage plan work in any lot, even those that were as little as 20′ across. 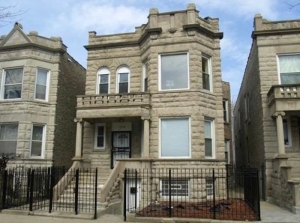 A typical Chicago greystone two-flat. They come in all styles.

As cottage-dwellers added entire stories to their homes, then moved on to bigger and better houses, new laborers would move into town and purchase those cottages.  Problem was, one guy didn’t need all that space.  Since the city’s zoning laws weren’t quite as sophisticated as they are now, he could buy the place and rent out one of the floors as he saw fit without having to cut through any red tape.  This was quickly recognized as a huge income opportunity, and soon dedicated 2- and 3-flats were going up all over the place.

The Chicago Tribune cheekily defines the two-flat this way: “two-flat / too flat / n. A residential, two-story brick building with a common front entrance and separate residences on each floor. One floor is often reserved, reluctantly, for mother-in-law. Common source of extra income/aggravation for Chicagoans.”

The 2-, 3-, and 4-flat model was incredibly adaptable to its inhabitants needs, but it was also adaptable from an architectural standpoint.  It was possible to use elements from practically any architectural style on the facade of a 2+ flat without altering the basic floor plan.  In Chicago, these buildings are often thought of as having a kind of Italianate look, with a strong cast iron cornice, but the 2+ flat could just as easily be Queen Anne, Richardsonian Romanesque, or any combination of styles.  This is probably one of the most enduring vernacular styles around, which speaks to its original purpose — financial efficiency — as well as its adaptability. 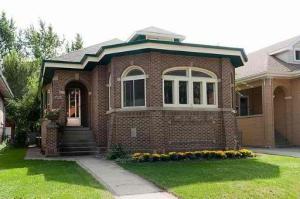 There was a brief moment, though, when both the cottage and the 2+ flat were pretty unpopular.  Don’t worry, they’ve recovered.

In the 1910s and 20s, Chicago expanded into greener and less urban-feeling areas, and the suburbs became even more reliably accessible via public transit.  Lots in these areas were much larger than their old city-center counterparts.  At the same time, modern efficiencies such as electricity and heat became a must-have in any house.  Of course, our 1850s cottages and 1870s 2-flats lacked those necessities, and installing them in an old house was an expensive, arduous, and potentially dangerous process.  All of these factors led to a period of ex-urban flight in which modest, middle-class families began purchasing cheaper, larger lots on the city’s edges and constructing new houses.

Enter the bungalow.  Of course, bungalows were already a West Coast housing staple, but the Chicago bungalow became its own unique type.  Because so many of the new bungalow builders had grown up in the city’s cottages, the Chicago bungalow essentially retained the cottage floorplan.  The difference was in the finishings and the mechanicals.  Bungalows came equipped with heat and electricity, and perhaps due to their California provenance, they were seen as very stylish, even though ownership was largely blue-collar.  Roofs were much more stylized, millwork was more intricate and of a higher quality, and they were almost always constructed of modern, machine-pressed plain and decorative brick.

There you have it: our vernacular spectacular preservation celebration has come to an end, for now.  But hey, keep the party going — step outside, stroll around your neighborhood, and take a little survey of the indigenous housing types you find nearby.