Sometimes folks just need to be saved from themselves. When I was a kid, I remember my mother’s comment, “There’s another house without a mirror,” when we passed someone that turned heads by their appearance. It wasn’t a compliment.  We all make mistakes — no one is immune from poor or uneducated choices. It’s not too different when it comes to homes, buildings or any other permanent structure visible within the public realm. When we make alterations and changes to our buildings, they’re out there for all to see.  All the time. Day and night. 365-days-a-year. I’ve made a few mistakes. I know.

As a real estate investor and broker,  I deal with all kinds of building alterations, decisions and screw-ups on a daily basis.  Some are reversible and some — well, not so much.  There is nothing academic or terribly informative in this post. It’s just an old fashioned oppinion  piece.   We’re just pointing (and laughing) within a tale of caution.  Think before you pick up the hammer or paintbrush. This is everyman – we’re not looking at high style architecture here.  Just your average Joe houses on the street where you live. Remember, buildings don’t have to be big and fancy to be historic.

If your addition increases square footage by 100% or more, you’re probably doing it wrong.

Listen, this is America.  We all want everything bigger, better, faster, stronger all the time always.  This works very well for us when it comes to electronics, cars, and pizza.  When it comes to renovating, rehabilitating, or otherwise altering a historic building, however, bigger is hardly ever better.  Ever.

If you’ve ever gone to a historic preservation commission meeting (and you should if you haven’t — free architectural expertise is your door prize), you’ve probably heard someone discuss “massing.”  Massing just refers to the harmonious spatial and volumetric arrangement of a particular building, and inappropriate massing is one of the most likely reasons a renovation project won’t be approved.  The planned work should honor the original mass of the building; that is, the addition should not dominate the viewer’s perception of a property or the neighborhood as a whole.  In a street full of 1 to 1.5 story bungalows, it’s visually disruptive and just plain asinine to plop a four story addition behind your house.  If you really wanted that home theater, maybe you shouldn’t have purchased a sweet little bungalow. 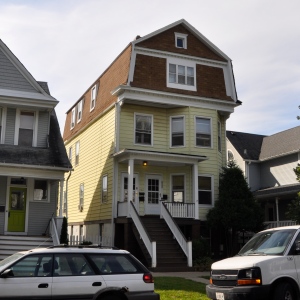 If your addition ends up looking like a house-sized Smokey the Bear Hat, you’re probably doing it wrong.

Take, for instance, our friends above, who decided what their airplane bungalow really needed was the tail end of a 1997 McMansion sitting on its shoulders.  The massing here is incredibly inappropriate for the original house, but  the real crime is that pair of fixed polygonal windows.   Oh, and the white vinyl siding is also an excellent touch.

And not to be missed here on our right is this little number.  You know, it has to be said, the first and second stories of this duplex look pretty darn good.  Original fenestration pattern is there, porch looks okay, and while the windows aren’t original, at least they’re visually compatible.  That bizarre 1.5-story, front-facing gambrel rendered in cedaresque asphalt shingle paper, though, is wince-inducing.

Best guess: in 1974, when we didn’t know about things like massing and historic compatibility, the owners of this duplex were hit pretty hard by the Carter crunch and had to slap another rental unit up there to make ends meet.   Let’s roll with that explanation.

If your house could conceivably stand in for the rock-climbing wall at your gym, you’re probably doing it wrong.

After massing, poor choices in materials are probably the second-biggest offense in renovations of historic buildings.  And hey, of course we don’t all have the time, energy, or financial means to scour the globe for historic face bricks or ashlar limestone or what have you, but in those situations, a light touch almost always produces a more successful result than a heavy one.

In the 1940s, 50s, and 60s, a heavy touch was IT. Period.  All those great little cottages and mixed-use main street buildings constructed in the first few decades of the twentieth century were reaching the dreaded 40-year mark.  Material culture historians and other lucky people who are paid to think about things like this have theorized that there’s an “ugly window,” which usually starts when something is about 30 years old and ends when it’s 50.  That time in between is when cultural artifacts, including buildings, are seen as supremely outdated, bizarre, and ultimately, ugly.  Think about it: 1964 was 50 years ago, and we’re enamored of Mad Men in nearly all aspects of our material culture.  We’re not yet clamoring to recreate the interiors and architecture in 1984’s most lasting cultural export, Ghostbusters, are we? 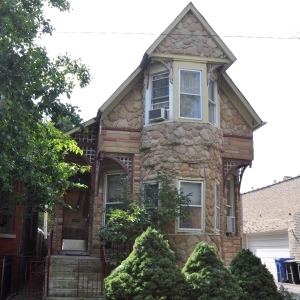 If you find yourself meticulously matching your faux stone to the color of your painted gingerbread work, you’re probably doing it wrong.

In the 1940s, faux stone was new, cheap, great for covering stuff up, and easy for a couple of guys to install in one aesthetically dark day.  In other words, it was the bee’s knees for owners of cottages that had been built in 1900(ish) and therefore were looking a bit like Ghostbusters does to us now: shabby.

Faux stone is so ubiquitous now that it’s frankly almost easy to miss it.   Our friends here to the right and left, however, are excellent examples of how houses that we’d now consider great, beautiful examples of vernacular domestic architecture of the early 20th century can be completely altered by a crappy material.  Faux no no.

One of the most widely accepted falsehoods about historic preservationists is that they are evil people who “want to tell you what color to paint your house.”  You heard it here first: ninety-nine times out of a hundred, we cannot do that.  One hundred times out of one hundred, we probably wish we could.

Typically, the local homeowner’s association is the only group with the authority to do enforce paint color standards.  The historic preservation commission often has a hard enough time getting building permits to come across their desks, so paint color is pretty far off the radar.  Maybe if you live in a historic district and decide to paint your 150-year old brick two-flat with hot pink polka dots, you’ll get a gentle chiding at worst.  As always, it depends on where you live and what the ordinances are. 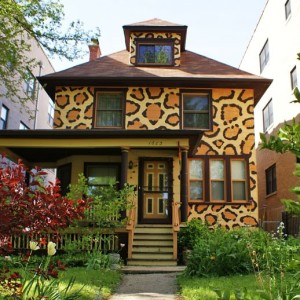 If when choosing a paint scheme you took inspiration from the clearance club top rack at Burlington Coat Factory, you’re probably doing it wrong.

If you live somewhere without a strong homeowner’s association or historic preservation ordinance, though, beware: your neighbors can probably go bananas if they want to.  Then there are those whose color crimes surpass bananas and probably more correctly fall under “deranged.”  Here’s looking at you, Chicago’s famed sort-of leopard, sort-of giraffe house.  You may have seen this one kicking around the ol’ Interweb — or gasp, in the flesh.

In all seriousness, this sassy little American Four Square is in Rogers Park has an interesting story.  When the owner bought it back in 2002, there were six very opinionated people living there.  The place needed a paint job, the owner held a house meeting, someone jokingly suggested leopard when the Sherwin Williams basics didn’t cut it, and the rest is history.  It’s since become a North Side legend, and according to the owner, “Kids love it.”  Oh, my. 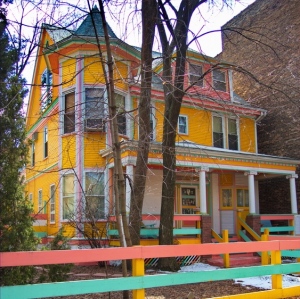 If your house is visible from outer space, you’re probably doing it wrong.

Also in Rogers Park is the so-called Candyland House, where a retired art teacher and day-glo enthusiast decided her house’s olive drab exterior just wasn’t befitting a sugarplum fairy such as herself.  Again, with the kids: owner insists they love it and call it the Barbie house.  Owner also readily admits she’s insane.

Insane, maybe, but also well within her rights as a historic homeowner, as is her neighbor George of the Jungle over there.  There’s a lesson here, folks – cut down on the  hallucinogenic drugs.

If your house ends up looking like the it could be part of a mural at a Jimmy Buffett’s Margaritaville restaurant and you don’t live in Key West, you’re probably doing it wrong.

In the “Stone Drunk” section of this post, we ruminated on the dangers of covering historic cladding with crappy faux stone.  There is a similar story to be told here: like mass-produced faux stone, vinyl siding is a cheap, easy way to update a house’s exterior.  Unfortunately for us, while faux stone isn’t manufactured and certainly isn’t so popular any more, people still LOVE their vinyl siding.

It’s possible that vinyl siding is less flinch-worthy because it at least replicates the look of wooden clapboards.   Does it really look like wood?  No. No, it does not.  You’re driving a Kia and pretending it’s a Cadillac.  Wood clapboard siding is what a nice old house deserves.

Aside from the “affordability” factor, vinyl siding is just not a noble material.  New vinyl siding is cheaper than wood, but generally lasts for 10-15 years, and that’s with annual cleaning and more frequent monitoring for water entry, cracks, and so on.  Those wood clapboards you think you can’t afford will last the lifetime of your house if properly maintained.  And let’s not even get into the sustainability issue.

There is so much going wrong here that I’ve lost the joie de vivre of this “you’re doing it wrong” bit.  If you own this house, you’re definitely doing it wrong.

Take the Sasparilla Surprise above.  There are so many levels of Key-West-meets-Old-West-cuckoo-crazy going on here it’s hard to even get started, but imagine this thing with wood clapboards painted a nice, neutral taupe and a stronger wooden cornice instead of all that vinyl wrap crap.  You feel better already, don’t you?

Here is your new zen koan: Vinyl is hardly ever the answer.

There are so, so many of those out there.  Porch enclosure is and long has been an incredibly common way to non-invasively add another room to your house.  That little edit becomes very, very visually invasive when you half-ass it, as so many of us out there are wont to do.  Well not us.  We know better now.

If your house ends up looking like one of those support trailers you see in schoolyards or on construction sites is parked out front, you’re probably doing it wrong. (Nailed it!)

Basically, if you live somewhere where you are able to make changes like this without facing the bitter wrath of the HPC, you need to use your best judgement.  No, we’re not all preservation architects, but so much of good restoration work comes from common sense decision making.

Enclosing your porch isn’t the best thing you can do for your historic house, but if you really need the space and are willing to think critically about the planned work, it’s kind of okay.  They key is to honor the massing of the original. Remember massing?  Told you it was important.  If there were columns on the original porch, try to preserve that scheme in the enclosure plan.  Think about the fenestration pattern on the original exterior wall.  And in the name of all that is holy, don’t use vinyl siding.

Let’s Wrap This Up

DYSV admires innovative design, contemporary taste and cutting edge solutions, so don’t think we’re staunch and narrow in vision and taste. When  it comes to making building alterations, old or new, we know just enough to get ourselves in trouble. We’ll say it agian, just think before you pick up the hammer or paintbrush. Here are a few questions to  consider before making any changes or alterations:

Have you seen something worthy of a hand slap?  Let us know.  We’ll start building our arsenal for “What Were They Thinking, 2.0.”