Folks ask me all the time about historic districts and what the big deal is about them? Well, here’s a quick snapshot of one of Chicago’s historic districts, listed on the National Register of Historic Places;  Lakewood Balmoral.

Let’s dial it back to 1885. Edgewater finds its beginnings with John Lewis Cochran, a Philadelphia tobacco agent, who purchased several tracts of land along Lake Michigan beginning in 1885. Much of the lakefront, along Sheridan Road before the turn of the century boasted large mansions for Chicago’s hip and cool elite set. Cochran wanted to attract the emerging urban middle class to his new suburb by building reasonably sized single family homes. Fast forward – in 1889, Cochran’s suburb of Edgewater was annexed (one of quite a few) to the city of Chicago and in 1890, he then purchased a tract of land between Broadway (east) and Glenwood (west) and between Foster (south) and Bryn Mawr (north). This new addition to Edgewater has become what we now know as the Lakewood Balmoral neighborhood. Follow? Good. 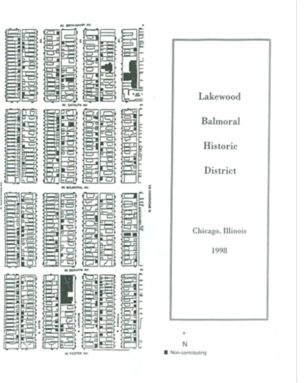 subdivisions, allowing the emerging middle class to purchase the less expensive lots and build homes on the typical 35′ x 123′ lots. Cochran worked with several architects, including Niels Buck to design houses. Buck designed at least eight homes we know of in Lakewood Balmoral. Cochran also dabbled in investment and speculative housing, popular at the time. He had designs for several row homes, where the intention was to live on one side and rent the other side to another family. He did not however, approve of flats and higher density typologies  and influenced ordinances in the Lakewood Balmoral neighborhood, prohibiting flats or apartment buildings from being built on the single-family residential streets for at least 20 years after the purchase. No good deed goes unpunished – by 1901,  at least one flat had been built, followed by several others in the following years.

Due to the depression of 1893, many developers were only able to sell their lots, undeveloped. Cochran was an exception, he was financially able to build homes on the lots and re-sell them for a higher profit than the lot alone. By 1905, his Lakewood Balmoral neighborhood was the most developed section of Edgewater west of Broadway. To learn more about Edgewater’s development, visit the Edgewater Historical Society.

In 1909, the city of Chicago re-numbered the streets – that’s convenient, huh? Previously the addresses were 2300-2500 N. Lakewood, Magnolia, or Wayne, but after the re-numbering they were renumbered 5200-5500. Keep this in mind if researching your Lakewood Balmoral home (or any Chicago building built before 1909), the address (when constructed) will most likely be the original numbers.

Queen Anne’s to classic American Four Squares, almost every type of turn-of-the-century residential architecture can be seen on the tree-lined streets. The homes are generally brick or frame construction, with large front porches, and at least two, but usually three stories tall. Notable architects such as Niels Buck, Ivar Viehe-Naess, George W. Maher, and Holabird and Roche contributed to the integrity and pedigree of the designs. Lakewood Balmoral appears much the same as it did over 100 years ago. Ironically, the majority of the large mansions on the lakefront have been razed and replaced with high density apartment buildings, while the homes in the Lakewood Balmoral historic district are intact well-maintained. 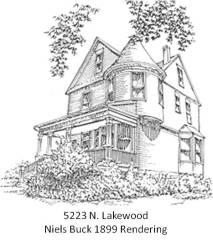 Because Lakewood Balmoral was so developed by the turn of the century, the housing stock is exceptional. Lakewood Balmoral was designated as a Historic District in 1999, with the majority of the homes retaining a high degree of integrity. Homeowners in this neighborhood are praised for meticulous care of their homes, streets and sidewalks. Because of the long-term investment in the neighborhood as well as the historic district’s inherent sense of pride and home ownership, single-family homes regularly sell for over $1 million. At least six homes that sold in 2015 crested the $1 million mark.

One of Niels Buck’s 1899 designs, located at 5223 N. Lakewood is currently for sale. Check out the listing HERE.

With the lake just to the east and the lively Andersonville neighborhood to the west, this neighborhood has a lot to offer. The Uptown neighborhood – one that we blogged about here not long ago is rebounding as an entertainment district – is just a few blocks south of the Lakewood Balmoral district. Red Line “L” stops at Berwyn and Bryn Mawr make for a short and pleasant commute into the heart of the city.

If you are looking for a home with loads of  character in a friendly, walkable neighborhood, the Lakewood Balmoral Historic District is your destination. As a sidebar; touring the Lakewood Balmoral district offers up a concentrated portfolio of iconic American architecture.  Take a stroll and enjoy!