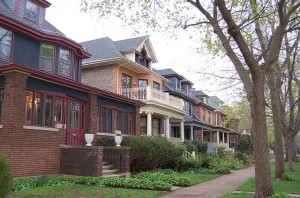 A view of Lakewood Avenue shows a row of homes with front porches, generous setbacks and sidewalks that lend to the neighborhood feel of the Lakewood Balmoral district.

Today at I Speak Vintage we are taking a deeper look at one of Chicago’s most unique neighborhoods that is rich in history, charm and neighborhood feel.

The land that would become the Lakewood Balmoral Historic District was purchased by John Lewis Cochran in 1890 as the third addition to his larger Edgewater development. It would become a middle-class residential district made up of single-family homes of a variety of architectural styles from the late 19th century including Queen Anne, Shingle-style and Dutch Colonial. Other, slightly later homes in the district show influence of the Arts and Crafts Movement that was so popular at the beginning of the 20th century.