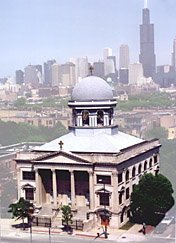 Our Tuesday column continues this week with a deeper look at the preservation and reuse of religious structures. The Nation Trust for Historic Preservation continued their ’10 on Tuesday’ selection with this post. I thought it would be interesting to answer their concluding questions by offering some examples from the Chicago area as part of our parallel series.

The first suggestion in the Preservation Nation blog is to find other congregations to use the space. Chicago has a long history of this, especially on the near south and west sides when Jewish populations were replaced by African American populations. The image on the left shows the former Anshe Sholom Synagogue, built in 1910 for the Jewish population that lived near Polk Street and Ashland Avenue. In 1927 the building was converted to a Greek Orthodox Church, which it remains today. You can still find some original Hebrew script carved in the pediment over the main door. A more in-depth history can be found here.

A good example of a community combining tips number two and three in the Preservation Nation blog, consider cultural or educational purposes and listen to the neighborhood, is the Oak Park Arts Center.

Originally a 1st Church of Christ, Scientist church, the congregation had dwindled in the 1980s and decided to sell the building after realizing they could not afford to maintain it. Luckily, the buyer at that time was sensitive to the structure and thought broadly about how it could best benefit the community and continue to be used for decades. The basement of the building became the Ernest Hemingway Museum and the upstairs became a performance space for concerts, allowing it to serve the community and tourists alike.

Finally, to show that regardless of how many resources are out there and the will of the community, religious structures can meet their fate. That is the case in a south side neighborhood of Chicago today.

The Archdiocese of Chicago decided to demolish the historic St. James Roman Catholic Church and this beautiful old building is being dismantled a little more each day. Advocacy groups rallied to try to convince the archdiocese otherwise, but in the end they are the building owners and have the ultimate say. Unfortunately, Chicago is losing a 133-year old building that told the story of several populations that lived in the area. The original congregants rode carriages to church and lived in nearby brownstones and mansions. Later congregants included African Americans who had made their way up from the south, settling in what would later be named Bronzeville. This history will be one step closer to being lost when this building is gone, and that is one of the primary reasons to save religious structures – they hold the stories and the history of an area even though the inhabitants change.