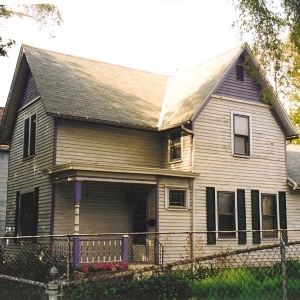 Up for a challenge?

I bought an old house. From 350 miles away, I decided to REHAB a house in one of Cleveland, Ohio’s historic neighborhoods. A vibrant area of restored Victorian cottages, multi-gabled Queen Anne homes, second empire tributes and a mix of turn-of-the-century European influenced styles.  This melting pot of architectural styles also boasted a diversity of cultures and socioeconomic demographics. Diversity, evidenced by multiple disappearances of my gutters, building materials, tools and, on one occasion, a pair of shoes. Seriously?

This is more about the journey than the actual REHAB. By definition, a journey is traveling from one place to another – usually taking a long trip, Welcome to mine. This is the story of a house divided amongst itself; literally and figuratively. A house that should have been torn down years ago, NOT purchased with the romantic notion of restoring it to a quaint urban cottage. Yet that is exactly what I did and, at the time, it truly seemed like a good idea. I wish I had thought to start this therapy session (call it a blog) years ago and perhaps, by chronicling this journey via the written word, I could have avoided the rolling storm clouds and plagues of locust.

While much of this journey has little to do with the house, I correlate and reference the timeline in large blocks.  Like when I had to rip up the front yard and replace the entire sewer line; $5000.00, thank you very much.

Each mishap somehow lashed me more tightly with my hometown, this falling-down money-pit and the neighborhood of toothless booze hounds    What should have taken 12 months stretched over 4 years, by which time the real estate market was a tumultuous roller coaster. So, I decided to hold on to the house for a while.  Here’s the rub; I had to REHAB the REHAB. I bought the house to provide my brother with an opportunity to build his contractor business with full intention of selling it when complete. Well, his definition of complete and mine were different.  He saw it for what it really was, a flip. I made the mistake that many rehabbers make.  I was spending money as if I were going to live in it.   Lord, deliver me  from myself.

For some reason this house brought familiarity and comfort to me the first time I saw it. Was it a rotting, dilapidated excuse for a house? Absolutely. Was the idea of managing a total rehab from 350 miles away a lousy idea? You bet. I couldn’t wait to get started.

After 4 arduous years of false completions,  I took a brief hiatus from Chicago and went “home” (I am from Cleveland originally) and finished the house.  Then the party really started.

October 2010; after taking firm control of the checkbook I had no choice but to get creative with how every penny was spent. I wanted to maintain  the home’s heritage and integrity and a strict budget certainly facilitated that. The kitchen plan was originally sketched up pretty much on the back of an envelope and it simply did not make use of the kitchen’s size and terrific natural light.  In reconstructing the layout, I took old doors found in the basement and cut them down to build a breakfast bar and re-purposed the granite I had cut for the original layout.

The second floor which I originally planned to carpet took a hit as well.  The stairs and floors were typical of an 1887 worker’s cottage built for employees of Cleveland’s steel mills – pine planks that were patched, gouged, and in some places, patched with old soup cans.  Rather than trying to cover them, I celebrated them.  I painted them, added some well planned “distressing” with a belt sander  and then varnished them. Bam!  They looked terrific and added some wonderful texture to the upper level.

Here I was, 4 years after I had restored 80% of the exterior clapboard and the damn thing needed to be repainted. I discovered it had not been primed and was painted when the wood was damp. #@%$!*! Clean living truly must triumph because February, 2011 brought a week of temperatures in the 60’s. Hallelujah!  I roped one of my disenfranchised neighbors (probably the one that stole the gutters 3 years prior) to help me out.  We got ‘er done in 3 days.  I doubt he spent the money on much needed dental attention.  So be it.

I could make a long story even longer but you get the idea. Well, when all was finally finished in spring of 2011 I put the house on the market.  One open house.  SOLD. List price.