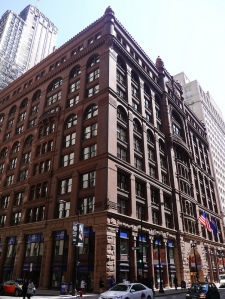 The types of value that historic preservation offers are too numbered to capture in one blog post. Many of the values are intangibles that are unquantifiable. Some are quantifiable, including a hot topic of recent years.

This week, I Speak Vintage will begin with the environmental advantages of preserving buildings. Preservation Green Lab of the National Trust for Historic Preservation has been established in Seattle for 4 years now. They provide the most comprehensive analysis to date on building reuse. This site summarizes a study on the environmental benefits of reusing old buildings. The Green Lab focuses a lot on the embodied energy that building materials contain and the fact that it took a lot of energy to mine or manufacture the materials and transport them to the job site. They also focus on the energy used on the job site by both machine and man, some of who were great craftsman. They focus on the jobs that historic preservation creates and the skilled labor that it requires. The Green Lab works from the premise that buildings consume a large percentage of energy used every year – more than all the vehicles on the road. They believe that retrofitting and improving the performance of buildings is one of the most sustainable practices out there. That is something that is quantifiable and that the Green Lab continues to put numbers out on.

The aesthetic value of buildings is something that can be thought of as a matter of taste and is mostly unquantifiable. Some buildings look very good and appeal to broad portions of society. Simple as that. This isn’t a point that is very arguable and one that usually works its self out in the long run. The best example of this is Prentice Women’s Hospital. If you ask an architect or engineer they would use phrases such as one-of-a-kind, an engineering feat, a work of art, a unique contribution to a city of boxes and on and on to describe the building. If you ask the average Chicagoan who knows nothing about the building or architecture in general and has no connection to Prentice Women’s Hospital they say it is an eyesore, hideous and boring. They don’t see the beauty, boldness, symbolism and uniqueness in the building.

Chicago’s Mayor might have been appealing to the average Chicagoan when he, in Roman Emperor fashion, gave the thumbs down to preservationists and the thumbs up to Northwestern Hospital, allowing them to move forward on demolishing the building. Read more on that here.

This is a blog about legal matters concerning historic preservation. The truth about that particular subtopic is that sometimes it doesn’t matter – rules don’t apply, money wins. It is clear that is what happened in the Prentice case, the mayor sided with one of the biggest institutions in the city and they are going to have their way.

Like art, the value of building preservation is hard to quantify. That is something that those in the field have been struggling to show for years now. The Preservation Green Lab makes a case on the environmental benefits of saving buildings that is hard to argue with. The beautiful buildings – the Picassos and Monets of the built environment – are coveted and their demand rises every year. The beauty of modern buildings, especially those of the Brutilist style, are often not seen yet and are misunderstood by the masses. The market often works out aesthetic value of buildings.

Next week I Speak Vintage will explore more of the unquantifiable values of historic preservation, including educational and quality of life. We will also look at some of the professionals in the field who have been trying to quantify the preservation of historic buildings economically.

Until then, we would love to hear from historic building owners who have invested in historic properties. What are some of the challenges you have faced? Have you seen the value of your property increase, decrease, stay the same? What types of value do you think your building holds?