The Wilson Red Line station circa 1923.

There has been a lot of talk about Chicago’s Uptown neighborhood over the past few years. This article from a few months back gives claim that the area has been up-and-coming for years now. However, the question everyone is still asking is “Is it going to happen?”.

The Chicago Transit Authority is investing $203 Million in the reconstruction of the Wilson Red Line Station in the Uptown neighborhood. Many are very optimistic about what this will mean for the neighborhood. The station is just a block north of a Target, the new beacon of gentrification, that went in a couple of years ago.

A rendering of what the station reconstruction will look like with a current view of the station inset.
Image source.

Mayor Emanuel  has expressed his interest in seeing the Uptown neighborhood revived since shortly after his election.

The Uptown Theatre is obviously a major piece of the puzzle to rebuilding the neighborhood. At the turn of the 20th century the intersection of Lawrence and Broadway was on the edge of a growing Chicago. By the 1920s the area had become a major theatre and retail district with a variety of building types. The Green Mill is a remaining example of a building type that existed to accommodated concert goers after the show. The economy of Uptown was strong and supported tens of thousands of customers both day and night. The neighborhoods surrounding the intersection of Lawrence and Broadway contain a mix of small 3 or 4-flats, large apartment buildings, single family homes and mansions. A lot of the larger buildings have been subdivided throughout the various economic downturns since the 1920s. However, a lot of the well-built housing stock from that time remains. This rehab project is particularly exciting – a pool from the 1930s! 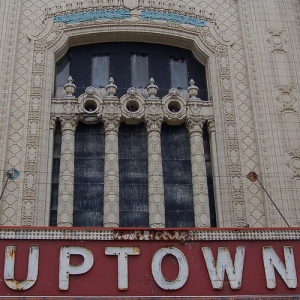 The Uptown Theatre has been closed since 1981 but still has strong support from locals. In 2008 JAM Productions purchased the building and seemed to put a fresh light at the end of the tunnel towards restoration. Landmarks Illinois put the Uptown on their 2010 ’10 Most Endangered’ list in an attempt to rally support under the new owner. That energy has not yet come to fruition, although Ald. James Cappleman (46th) has been quoted recently in an article that included the Uptown Theatre along with the Aragon Ballroom and Riveria Theatre as restoration cases and pieces of the puzzle to reviving the neighborhood.

It seems as though the entire city is behind a revitalization of the Uptown neighborhood. Some are skeptical that it will happen, others are optimistic.  A shooting at 6pm on Wilson Avenue last night makes it hard to make the case that this neighborhood is safe and livable.

One article makes the summation that Mayor Emanuel is going to solve Uptown’s problems with music. Although that is not a terrible idea, since Uptown is one of the most diverse areas of Chicago, the plan doesn’t solve gang issues. Controlling gang retaliation is not something that the Chicago Police Department have proven to have a firm grasp on. It doesn’t matter how many cards are stacked in the built environment’s favor, if people don’t feel safe in the area they won’t come.